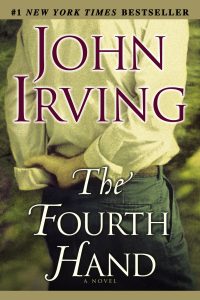 “Imagine a young man on his way to a less-than-thirty second event — the loss of his left hand, long before he reached middle age.”

The Fourth Hand asks an interesting question: “How can anyone identify a dream of the future?” The answer: “Destiny is not imaginable, except in dreams or to those in love.”

While reporting a story from India, a New York television journalist has his left hand eaten by a lion; millions of TV viewers witness the accident. In Boston, a renowned hand surgeon awaits the opportunity to perform the nation’s first-hand transplant; meanwhile, in the distracting aftermath of an acrimonious divorce, the surgeon is seduced by his housekeeper. A married woman in Wisconsin wants to give the one-handed reporter her husband’s left hand—that is after her husband dies. But the husband is alive, relatively young, and healthy.

This is how John Irving’s tenth novel begins; it seems, at first, to be a comedy, perhaps a satire, almost certainly a sexual farce. Yet, in the end, The Fourth Hand is as realistic and emotionally moving as any of Mr. Irving’s previous novels—including The World According to Garp, A Prayer for Owen Meany, and A Widow for One Year—or his Oscar-winning screenplay of The Cider House Rules.

The Fourth Hand is characteristic of John Irving’s seamless storytelling and further explores some of the author’s recurring themes—loss, grief, and love as redemption. But this novel also breaks new ground; it offers a penetrating look at the power of second chances and the will to change.

“A touch of the bizarre has always enlivened Irving’s novels, and here he out-does himself in spinning a grotesque incident into a dramatic story brimming with humor, sexual shenanigans, and unexpected poignancy”

“Despite copious copulation, The Fourth Hand possesses the eloquent simplicity of a child’s story. . . . His novel entertains so hugely, one is left to ask; how did such a moving dénouement slip past all that sex?”

Why I wrote The Fourth Hand when I wrote it

My sixth novel,The Cider House Rules, was published in 1985,by which time I had already started my seventh, A Prayer for Owen Meany. That year I also began writing the screenplay of ‘Cider House, for which (fifteen years later)I would win an Academy Award. But the first draft of that screenplay was a nine-hour movie; it wouldn’t have won anybody an Oscar.

Rewriting is what I do best as a writer. I spend more time revising a novel or a screenplay than I take to write the first draft. And 1985 marked the beginning of what has been, to date, a seventeen-year-old habit –namely, writing at least one screenplay concurrently with whatever novel I am writing. Nothing has helped my process of revision more.