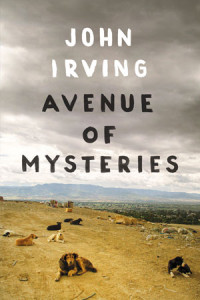 Avenue of Mysteries: A note from John Irving

A note about Avenue of Mysteries

As a novelist, I know something that works better than any synopsis of what a new novel is about.  You would be better off reading the first few paragraphs of the first chapter, because that’s all the author wanted you to know about the book before you start reading it for yourself.  Believe me: the author just wants you to begin reading.

This is the beginning of my fourteenth novel, Avenue of Mysteries—just the first five paragraphs of the first chapter:

Occasionally, Juan Diego would make a point of saying, “I’m a Mexican—I was born in Mexico, I grew up there.” More recently, he was in the habit of saying, “I’m an American—I’ve lived in the United States for forty years.” Or, in an effort to defuse the nationality issue, Juan Diego liked to say, “I’m a midwesterner—in fact, I’m an Iowan.”

He never said he was a Mexican American. It wasn’t only that Juan Diego disliked the label, though he thought of it as such and he did dislike it. What Juan Diego believed was that people were always seeking a commonality with the Mexican-American experience, and he could find no common ground in his own experience; more truthfully, he didn’t look for it.

What Juan Diego said was that he’d had two lives—two separate and distinctly different lives. The Mexican experience was his first life, his childhood and early adolescence. After he left Mexico—he’d never gone back—he had a second life, the American or midwestern experience. (Or was he also saying that, relatively speaking, not a whole lot had happened to him in his second life?)

What Juan Diego always maintained was that, in his mind—in his memories, certainly, but also in his dreams—he lived and relived his two lives on “parallel tracks.”

A dear friend of Juan Diego’s—she was also his doctor—teased him about the so‑called parallel tracks. She told him he was either a kid from Mexico or a grown-up from Iowa all the time. Juan Diego could be an argumentative person, but he agreed with her about that.