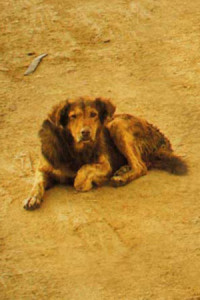 IN THE FIRST TRAILER, Irving describes the parallel tracks on which the story is told: In one story, there is a a fourteen-year-old boy named Juan Diego, growing up in Oaxaca, Mexico. In the other story, Juan Diego is fifty-four years old and travelling to the Phillipines. He takes medication that causes him to vividly dream about his childhood in Mexico.

IN THE SECOND TRAILER, Irving talks about writing about writers—Juan Diego, at fifty-four, is a writer. Irving warns that if, like Juan Diego, you’re a writer with an active imagination, travelling alone and taking powerful medication, you need “to be careful about what you imagine.”

IN THE FINAL TRAILER, Irving talks about the Spanish terms used to describe the world of Juan Diego and his mind-reading sister, Lupe. They spend their childhood in a dump and are known as los niños de la basura, the children of the rubbish, for the way they pick through the refuse.  In the dump fires, Juan Diego finds burning books and teaches himself to read. As Juan Diego and Lupe become part of a Jesuit orphanage and, eventually, a circus, their lives are touched by tragedy and mystery.