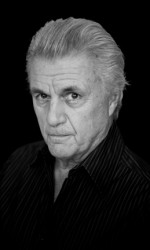 PW caught up with John Irving to discover more about his forthcoming novel, In One Person (S&S, May). The book explores the nature of unfulfilled love through the voice of Billy, the bisexual narrator and main character, who tells the tragicomic story of his life.

Your publisher, Jonathan Karp, said that he couldn’t think of another contemporary American novelist who has written about bisexuality with such fervor. Do you agree, and if so, what accounts for that fervor?

The only part of “bisexual” that most straight men get is the gay part. Many gay men distrust bisexual men. Gay guys of my generation often believed that bisexuals didn’t really exist; they were usually presumed to be gay guys with one foot in the closet. And straight women trust bi guys even less than they trust straight guys. (A bi guy could leave you for another woman or for a guy.)

That said—and not to disagree with my editor—I wouldn’t claim that Billy is the most radical of my sexual outsiders or misfits. Dr. Larch in The Cider House Rules is an ether addict and an abortionist, but what’s strange about him is that he has sex once (with a prostitute) and stops for life; Jenny Fields, Garp’s mother, also has sex only once (with a comatose man); and Johnny Wheelwright, my “nonpracticing homosexual” narrator of Owen Meany, never has sex—not once, not with a man or a woman. For Billy to have sex with men and women doesn’t seem strange to me.