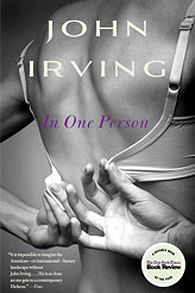 John Irving on In One Person, sexual identity, and autobiography.

John Irving, who turns 70 this year, will publish his latest novel on May 8. In One Person tells the story of Billy Abbott, a bisexual man who struggles with his identity and attraction to men, women, and transgendered individuals as the world changes around him. EW spoke to Irving to find out what we can expect of his highly anticipated novel.

ENTERTAINMENT WEEKLY: Given some of the recurring themes in your work, you’re frequently asked if your novels are autobiographical. Does that bother you?

JOHN IRVING: We live in an age where perhaps the capacity for imagination in the reader is less than it was. I can think of no other explanation why so many readers seem to be interested in memoirs, which are of no interest to me, and don’t seem to have imaginative capacity for fiction that is, well, more imaginative than most of the memoirs I read, try to read, or don’t read. What’s interesting is this: I can’t think of a specific date, but there came a time — not before the 90s in my experience — when you as a novelist began to hear, almost as a first question, “Is the father in this story your father? Is the sister in the story your sister? Is this character you? Did that happen to you?” When not just the first question but the first assumption from an interviewer was that surely the most interesting or the most credible parts of this novel have to be autobiographical.