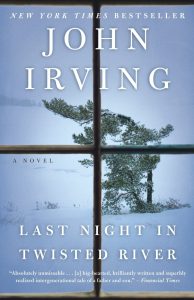 “The young Canadian, who could not have been more than fifteen, had hesitated too long.”

So begins John Irving’s twelfth novel,  Last Night in Twisted River.  In 1954, in the cookhouse of a logging and sawmill settlement in northern New Hampshire, an anxious twelve-year-old boy mistakes the local constable’s wife for a bear.  Both the twelve-year-old and his father become fugitives, forced to run from Coos County—to Boston, to southern Vermont, to Toronto—pursued by the implacable constable.  Their lone protector is a fiercely libertarian logger, once a river driver, who befriends them. In a story spanning five decades, Last Night in Twisted River depicts the recent half-century in the United States as “a living replica of Coos County, where lethal hatreds were generally permitted to run their course.”

An introduction to Last Night in Twisted River from John Irving.

Last Night in Twisted River is my twelfth novel. Only once before, in The World According to Garp, which was my fourth novel, have I been able to insert the title of the novel into the last sentence. I don’t always try to do that; I don’t force it. But it’s usually an idea in the back of my mind, and if it works, I don’t hesitate to do it.

I always begin with a last sentence; then I work my way backwards, through the plot, to where the story should begin. The last sentence I began with this time is as follows: “He felt that the great adventure of his life was just beginning—as his father must have felt, in the throes and dire circumstances of his last night in Twisted River.” And there’s the title, waiting for you at the end of the story Last Night in Twisted River.

I was born and grew up in New Hampshire. My uncle was in the logging business, in the northern part of the state. When I was a teenager, there were big log drives on the Ammonoosuc and Androscoggin rivers.

My cousin Bayard is still a timberland man; he manages the Kennett Company in Conway, New Hampshire. He has taught me a lot about logging and lumber. When I was a teenager, my cousin Bayard also taught me how to walk on floating logs. (I wasn’t very good at it; Bayard was better.)

This novel, like the last one, is dedicated to my son Everett, who is now in college. I would never let Everett walk on floating logs.

Part One of Last Night in Twisted River is set in Coos County, New Hampshire (that’s northern New Hampshire) in 1954. The first chapter is titled “Under the Logs.”

I’m going to share the first three paragraphs of that chapter with you, so you’ll know how this novel begins with an accident. Here’s the beginning of “Under the Logs.”

The young Canadian, who could not have been more than fifteen, had hesitated too long. For a frozen moment, his feet had stopped moving on the floating logs in the basin above the river bend; he’d slipped entirely underwater before anyone could grab his outstretched hand. One of the loggers had reached for the youth’s long hair—the older man’s fingers groped around in the frigid water, which was thick, almost soupy, with sloughed-off slabs of bark. Then two logs collided hard on the would-be rescuers arm, breaking his wrist. The carpet of moving logs had completely closed over the young Canadian, who never surfaced; not even a hand or one of his boots broke out of the brown water.

Out on a logjam, once the key log was pried loose, the river drivers had to move quickly and continually; if they paused for even a second or two, they would be pitched into the torrent. In a river drive, death among moving logs could occur from a crushing injury, before you had a chance to drown—but drowning was more common.

From the riverbank, where the cook and his twelve-year-old son could hear the cursing of the logger whose wrist had been broken, it was immediately apparent that someone was in more serious trouble than the would-be rescuer, who’d freed his injured arm and had managed to regain his footing on the flowing logs. His fellow river drivers ignored him; they moved with small, rapid steps toward shore, calling out the lost boy’s name. The loggers ceaselessly prodded with their pike poles, directing the floating logs ahead of them. The rivermen were, for the most part, picking the safest way ashore, but to the cook’s hopeful son it seemed that they might have been trying to create a gap of sufficient width for the young Canadian to emerge. In truth, there were now only intermittent gaps between the logs. The boy who’d told them his name was “Angel Pope, from Toronto,” was that quickly gone.