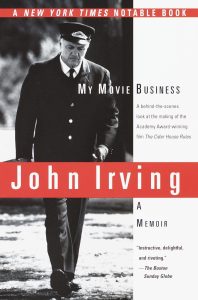 John Irving’s memoir begins with his account of the distinguished career and medical writings of the novelist’s grandfather Dr. Frederick C. Irving, a renowned obstetrician and gynecologist, and includes Mr. Irving’s incisive history of abortion politics in the United States. But My Movie Business focuses primarily on the thirteen years John Irving spent adapting his novel The Cider House Rules for the screen—for four different directors.

Mr. Irving also writes about the failed effort to make his first novel, Setting Free the Bears, into a movie; about two of the films that were made from his novels (but not from his screenplays), The World According to Garp and The Hotel New Hampshire; and about his slow progress at shepherding his screenplay of A Son of the Circus into production.

Not least, and in addition to its qualities as a memoir—anecdotal, comic, affectionate, and candid—My Movie Business is an insightful essay on the essential differences between writing a novel and writing a screenplay.

The photographs in My Movie Business were taken by Stephen Vaughan, the still photographer on the set of The Cider House Rules—a Miramax production directed by Lasse Hallström, with Michael Caine in the role of Dr. Larch. Concurrently with the November 1999 release of the film, Talk Miramax Books published John Irving’s screenplay.